The Old Corinth Road Bridge, commonly referred to as the Hadley Bow Bridge, was built by The Berlin Iron Bridge Co. in 1885 atop the foundations of an 1813 bridge. The Bow Bridge is unique in that it ...
➜
On the Lighter Side 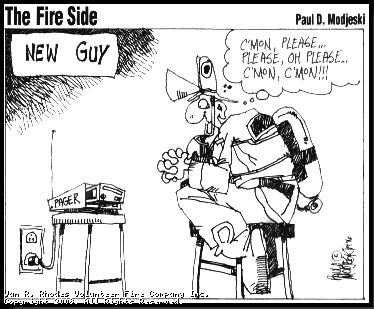 The Chief and Assistant Chief went golfing together one Saturday morning, as they have done for years. You might say these guys were fanatics about their golfing.

That afternoon the Assistant Chief returned home exhausted, and plopped down dejectedly in his easy chair. His wife, concerned by his appearance, asks if something went wrong with his game.

"No, no," he replied, "I had the best game I've had in years! As a matter of fact, I started out the first three holes at 4 under par, including a hole-in-two on the 3rd."

"So why are you so beat?" his wife asked.

"Well, the Chief had a heart attack and died on the 4th hole," he said.

"What?!? And you're exhausted from trying to save him?"


All your transmissions start with "Breaker 1-9".
You spent more on lights and sirens for your car than
you did on maintenance for the past 3 years combined.
You have ever sunk your rescue boat while fishing.
Your volunteer department has 40 members and there
are only 2 different last names on the roster.
Your friends make fun of you because you have more
pagers than three of your friends do put together.
You respond to your station in the middle of the
night and find no one around, only to realize that
the tones you heard were in your dream.
You buy tires for your truck every six months.
You've ever walked through a Christmas display
and walked away with at least 3 new ideas for a
light scheme for your personal vehicle.
Everyone on the fire department is related to you.
Whenever you go anyplace you insist on driving your
vehicle so you have a set of turnout gear and your
blue/red lights handy "just in case you need them".
You go out at midnight to make sure your vehicle is
backed in, not pulled in the driveway to get out quicker.
Beer is on the mutual aid list.
You leave your wife at a restaurant because "this is a big one".
You and your friends left a wedding to put out a grass fire.
Your turnout gear and your snowmobile suit
are the same article of clothing.
You use the departments "thermal imager" for
your early morning deer hunting trips.
You prefer to respond to the scene in your own vehicle
because it is better equipped to extinguish a fire
than the fire truck is, and because it’s quicker.
All the fire trucks have off road capabilities.
Your wife refers to your pager as a form of "birth control".
When there is a traffic accident that everyone else
is saying "Ugh!” you are saying "Cool".
You practice identifying hazardous materials being
carried on the Interstate while driving on vacation.
When buying a new vehicle, you insist on multiple
cigarette lighter plug ins for accessories, plus you
require large dash space for emergency lights.
You and fellow firefighters would rather tip a rollover
back on its wheel than wait for a tow truck.
You buy a new G.M.C. truck in fire red and
put more decals on it than the pumper.
You are so excited to finally get called out that
you turn your siren on at 4am in the morning.
You've responded to an outhouse fire with entrapment.
Your pumper has been on fire more times than it’s been to a fire.
Company Officers

This site has been viewed 572,116 times.
Calls
News
Events
Pictures
Apparatus
Maintained by the members and staff of Van R. Rhodes Volunteer Fire Company Inc.. Designated trademarks and brands are the property of their respective owners. Copyright © 2006-2022. YourFirstDue Inc. All Rights Reserved. Content on this web site is supplied by Van R. Rhodes Volunteer Fire Company Inc.. YourFirstDue Inc. cannot be held responsible or liable for any content, text, pictures, or any other media found on this web site.
Management login
Powered by